A themed boxset containing episodes from different Star Trek series, chosen by the fans. The theme of this set is 'alternate realities'. The box will be released on 30 november 2008.

After TNG, DS9 and Voyager it was only a matter of time, but now Paramount has officially announced the release of the Enterprise slimline dvd sets for this spring. The artwork for the first season can be seen below. And the first two releases will be pretty soon: on May 8th. 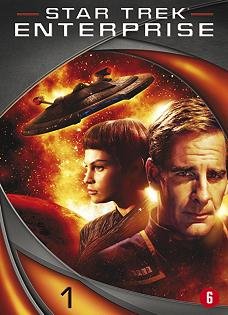 Since production of HighDefinition DVD players was discontinued a few months ago there has been speculation about the fate of the remaining remastered TOS seasons. But Paramount recently announced that in august the 2nd season will be released, although it will only be on regular DVD, not HD-DVD.

No word yet on whether Paramount will move to HD-DVD competitor Blu-ray anytime soon, but ofcourse we'll keep you updated.

Today the first Trek XI teaser trailer appeared online. It's not a very good quality yet. Click on play button below to see it. This clip may contain spoilers.