Yesterday Trek XI producer and director J.J. Abrams revealed the actor who is going to play Spock on Trek XI; Zachary Quinto. Quinto plays 'Sylar' on the scifi series Heroes. After Quinto took several questions from the audiance at the Comic Con in San Diego, California, Abrams announced yet another actor who will play Spock. "He is going to put the ears on one more time": Leonard Nimoy ! 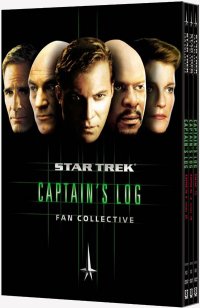 Last month we announced several release dates for upcoming Star Trek dvd's. Since then, fanclub The Flying Dutch has information about yet more releases.

A few loyal visitors of our website have notified us of something interesting. Since shortly ago Veronica has been airing Enterprise episodes in the very early morning, between 5:00 and 6:00. These are at the moment season two reruns. The reason is apparently that Veronica needs to air the episodes in time before they lose the broadcast rights. As you can see, we have added these airings to our TV Guide.

As you may have noticed, the earlier announced releases of the DS9 slimline sets are not yet in the stores. Apparently, the previously known release date was incorrect, and Paramount has given out a press release saying that the first two seasons will be out on thursday june 7th.

Our thanks go to 'Garenor' for bringing this to our attention.

In the last few days the Dutch Star Con organisation announced three news guests.Dwight Schulz and Dirk Benedict will re-visit the Netherlands. Dwight and Dirk are best known for their roles as "Howling Mad" Murdock and Templeton "Faceman" Peck on the A-team. Star Trek fans will know Schulz best for his role as Lt. Reginald 'Reg' Barclay on Star Trek: The Next Generation and Voyager. Benedict also played Starbuck on the original Battlestar Galactica series.